skip to main | skip to sidebar

As I write this I realize I have not posted anything since just after Mackenzie was born. Yeah, 3 kiddos keep me busy for sure. I just wanted to share our Pumpkin Patch Pictures. And talk a little about the kids costumes.

This year we decided to do away with cable. It just seemed that every time we turned around they were raising prices and it was starting to get ridiculous. So now we have Netflix which is great for us because we are less likely to let the TV run all day and we get to watch old cartoons from when George and I were kids. 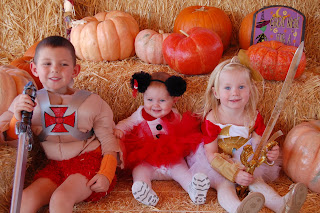 Lately Marty and Michaela have been enjoying He-Man and his sister She-Ra. These characters lead straight into Halloween Costumes because hey we are brother and sister and they have sweet swords. Oh and Mackenzie can be Minni Mouse.

So as Official Costume Maker I set out to create home made costumes for both of them.

I started with this picture of the two. and broke down all the little parts knowing that if I missed something Marty would so call me on it. 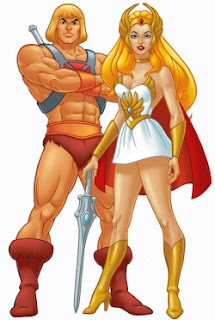 All of the materials I picked up a JoAnns. The best find was the faux-leather in silver fabric for the chest plate. I caught a glimpse of it hidden in the clearance apparel fabric. I used this to create the Chest plate and colored in the symbol with puff paint. It has elastic straps and a scabbard so that he is never without his sword while getting candy. 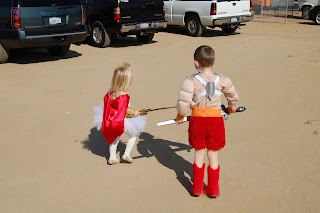 For the furry shorts I just used some furry minkie. This stuff feels great but gets everywhere. I mean everywhere. I am still finding it on things even after going through the wash. 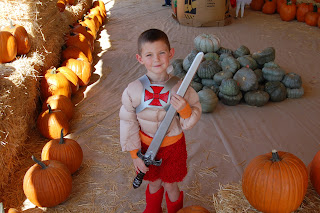 For Marty the trickiest part were the boots. I did not want to make spats because he tends to walk right out of them but was not going to be running all over and spending serious cash on red furry boots for my son. I think not. So Next best this Fuzzy socks. Long Ladies Fuzzy winter socks and Rain Boots.  I just slipped them on him and folded them over to cover the boots. Done and Done.

Michaela's Costume was pretty easy to start making. Just a white tutu with Gold tulle wrapped around to make a belt. I used the same Gold Tulle to make her She-Ra Bow (no head dress for her no thank you Mommy) and the gauntlets which is sew to fleece so her arms don't get irritated by the tulle. 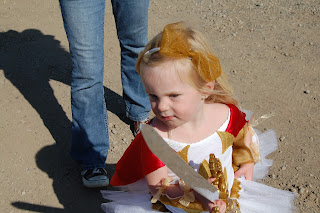 I used the same faux leather fabric to create the flower chest plate and wings made gold with multiple applications of Puff Paint and Glitter. The Aqua jewel was added along with her red cape.Gold Shoes and tights complete the look. 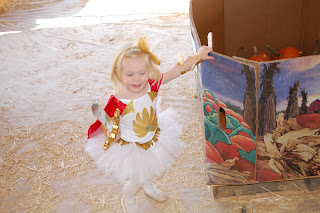 Lastly Mackenzie was chosen to be Minnie Mouse. In Tulle Pom-Pom Ears and Red Tutu. I added the peter pan collar and buttons to one of her many onesies and painted on her tail. 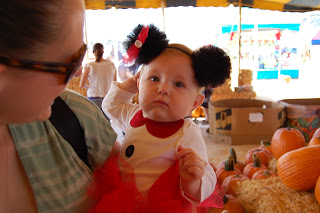 The kids had such a great time picking out their pumpkins and are jumping at the bit to head over to our friends for Trick or Treating.

Off to the rides at the mini carnival. 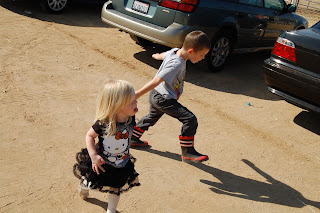 More picture are to come from tonight.
Have a safe and Happy Halloween.

Although it is probably gas. 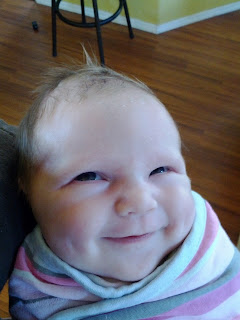 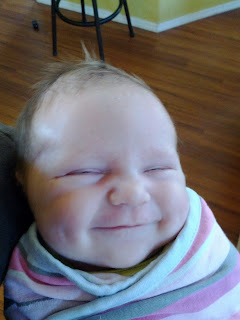 Those dimples by the way, all George. 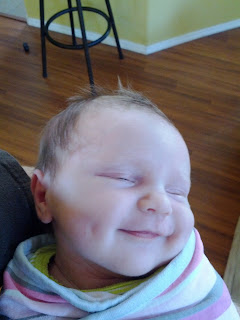 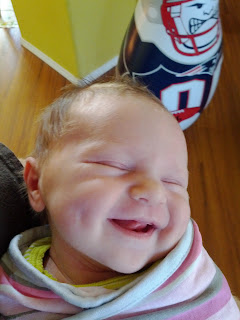 So everyone asked "Who does she look like?"
"Marty or 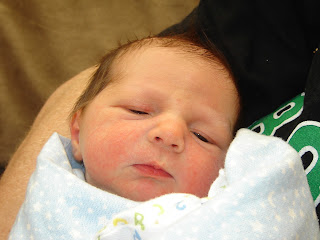 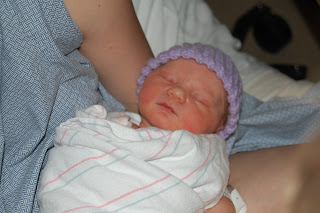 Well, I will let you guess.
Say Hello to....
Mackenzie Grace Arthur 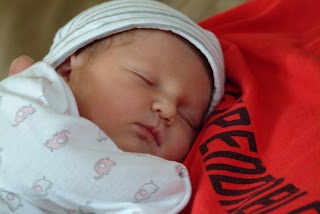 I must say that having a handy husband is one of the coolest things. Since we are still waiting on our littlest Miss to come join us, we have been getting as prepared as we can.
One of the big things on my our list was transitioning Michaela into a big girl bed. In order to to that of course we needed a bed. As I posted last time I found a great one at Pottery Barn but there was not a chance we were gonna drop that kind of cash.
So enter handy husband and Whaa Laa!
All finished and waiting to be painted 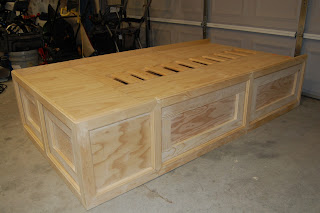 Marty just had to help. 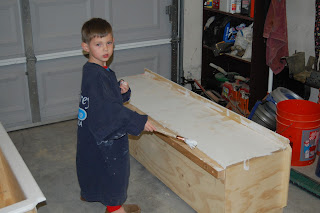 Waiting to be assembled. 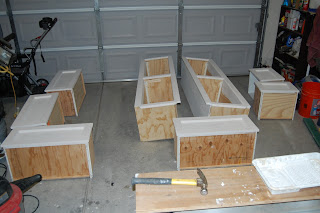 It was truly a family affair, my mom made the quilt. Well, she just happened to have it and it works perfectly. 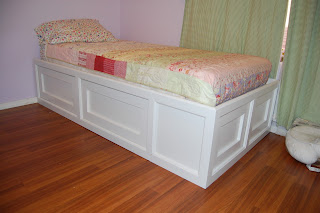 Do you think she likes it. Now if I could only keep her from jumping a throwing herself all over it. 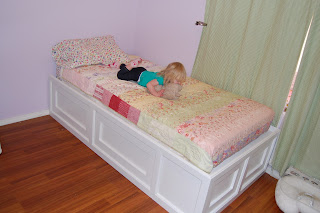 There are still a few projects to do before littlest Miss gets here. But until then we shall wait not so patiently and enjoy time we get with just the two big ones.
Posted by The Arthur's at 7:18 AM No comments:

So We have started potty training Michaela. 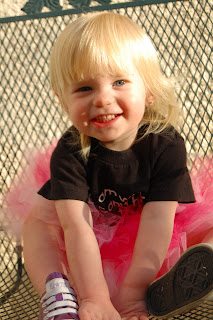 So far it has been interesting to say the least. She has successfully pooped a few times on the potty but has only begrudgingly (is this even a word!?!) peed once. She holds it, it mean like all day. And we are pumping her full of water an juice and salty things. And if she does have to go and starts. She stops, just like that. Sometimes is doesn't even hit the floor. So I guess that is nice because I am not mopping up puddles left and right.
The other fun thing about potty training is the outfits. NO pants and Just Fancy Panties. She got her first Hello Kitty this is summer so right now those are the fave.
Today after Nap this was her chosen look
A sweet shirt from Grandpa
Her tutu from her 1st birthday
Shiny purple Chucks 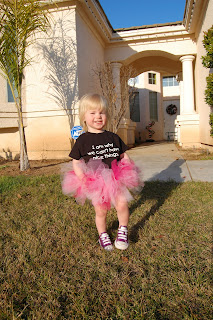 Close up on the shirt
So her by the way 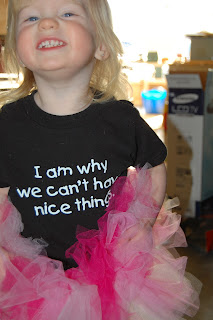 Later she added a hat to complete the assemble. 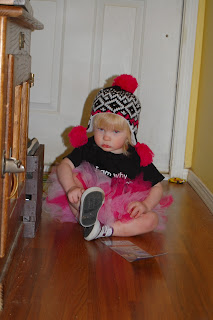 She is so done with the camera
This pregnancy has bee so different from the other two, mostly it is the heartburn however that is giving me the grief. Since I only have a month and a half to go I will just suck it up and keep putting down the Zantac.
In preparation of the new baby, Marty and George have been busy working in the garage on Michaela's bed. Since the girls are sharing a room I wanted storage beds, so that when they get older and need room to play they still have storage without having to have a dresser. As most people know I would so live in a Pottery Barn Catalog if I could.
And of course I feel in love with this bed, but so not the price.
Yikes!
You have got to be kidding me!
But bless the internet and handy husbands. I found this handy little blog that had plans for ... you guessed it an knock off version!!!!
Right! I know, Love it!!
George has been working out in the garage like a man who eats saw dust and wood glue for every meal. Here are just a few pictures of his manly handy work. 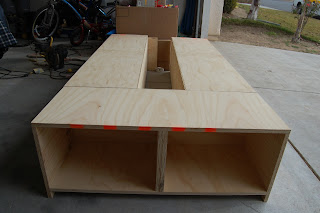 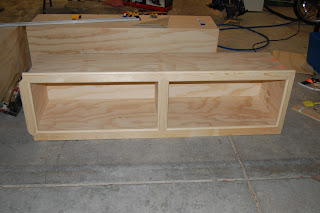 I can't get over how great it looks and how cool it is that Michaela and eventually our new little girl will have a bed that their Daddy (and Grandpa, Papa and Brother) made. 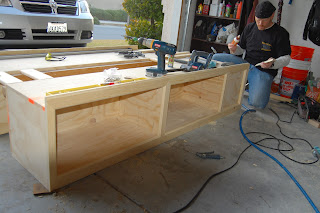 second side all finished and the front to go!
And really, how hot is a handy husband. They should make a cologne that smells like cut lumber. Right!
Posted by The Arthur's at 9:48 PM No comments:

The Arthur's
We are a family of seven; George, Katrina, Marty, Michaela, Mackenzie, Frankenstein (our cat)and Sonya (the wonder dog). Respectively we are a firefighter, a mom/athletic trainer/masters student, the three cutest kids, one freaky cat and one crazy dog.

Promote Your Page Too

Create a playlist at MixPod.com